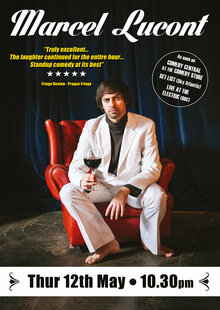 The organizer's data is in the "Brought to you by" section.

France’s finest flâneur returns to Barcelona for one night only, delivering an hour of his trademark deadpan jokes, wry observations and world-class sex poetry.

As seen on Comedy Central At The Comedy Store, Set List (Sky Atlantic), Live At the Electric (BBC).

“As far as comedy goes, it doesn’t get much better than this” ***** - The Advertiser, Adelaide Fringe (Aus)

-*- Want to become a member of the Comedy Clubhouse? Check out our Patreon to learn more and join! -*-

Brilliantly funny
This was the 3rd time I have seen Marcel Lucont and it was non-stop laughter (except for the annoying participation of one person in the audience). Comedy at its best!
Anne
Exquisite!
Loved Marcel from the first minute, even though he despises people, and with good reason! Don't miss him!
Irene

Details
We and our partners use our own and third-party cookies in order to offer you the service in a correct way, measure the visits made to our website and, in specific cases, show you advertising and allow you to share content on social networks. You can obtain more information about cookies by consulting our Cookies Policy. To continue browsing you must accept all of them or you can rechazar aquí measurement and marketing cookies.
Refuse